Deprecated: Function create_function() is deprecated in /home/customer/www/freepressdailynews.com/public_html/wp-content/themes/Newspaper/includes/widgets/td_page_builder_widgets.php on line 7
 Why did Harvey Weinstein Carry Three Books to his Arraignment Process - Free Press Daily News
Tuesday, May 11, 2021 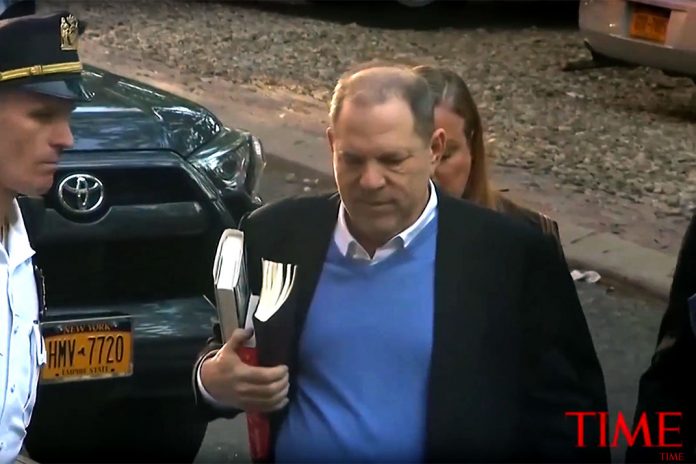 Disgraced former-Hollywood super producer Harvey Weinstein was finally arraigned in New York City for allegations of rape and various sexual deviances. The press was in full force when he arrived to the station at approximately 7:30 AM. Weinstein was then fingerprinted, cuffed and driven to the courthouse where he wrote a million dollar check for his $10 million bail.

But when he arrived to the station early in the morning, Weinstein bizarrely carried with him three books under his arm. One of those books was “Something Wonderful: Rodgers and Hammerstein’s Broadway Revolution” by Todd Purdum and the other was a biography of the film director, Elia Kazan, by Richard Schickel. It’s not clear why he had those books, but it’s as if he was purposefully carrying them as he entered the police station.

It’s not clear why he had those books

The actual process is important here. The New York police department announced a warrant for the arrest of Harvey Weinstein for a slew of felonies and Weinstein’s lawyers negotiated his surrender. Weinstein surrenders, he’s processed and driven to the courthouse to be arraigned. Prosecutors work with Weinstein’s defense attorneys to get him in and out, largely to focus on the trial. The whole thing lasted just over two hours and all parties knew the approximate length of that timeline. All parties knew that “express lane” arraignment process before he turned himself in.

You know he couldn’t possibly think he had any time to read a book, let alone three books. Also, his lawyers would alert him that he wouldn’t be allowed to have reading material while he was being processed.

Harvey Weinstein is delusional if he thinks that he has any shot of making a comeback in the film industry. In the wake of the #MeToo movement and the countless horrific allegations amongst many Hollywood players, Weinstein’s is by far the worst. Even Kevin Spacey’s accusations – as perverse as they are – are a distant second.

Weinstein was eerily nonchalant and the books were the main indicator that dictated that persona. Being charged for the severity of his alleged crimes is quite harrowing. But it’s as if he was sending a message to the press that he actually had time to focus on reading during this process. And that might be exactly why he did it, to maintain the image that he’s innocent. When criminals try to hide a crime, the trick is to act as naturally as possible, right? It was as if Weinstein used those books as a crutch to say it’s “no big deal.”

Weinstein used those books as a crutch

And you can’t accomplish that with just one book. You need several BIG books under your arm to accomplish this feat because it creates the illusion that he’s like an important accomplished professor bee lining to his next class.

That’s where the content of the books he’s “reading” comes into play. Both books are about Broadway legends Kazan, as talked about in Schickel’s biography, was a womanizer. Composer Richard Rodgers was allegedly known to be sexually aggressive towards women cast in his musicals. But Kazan also testified before the House Committee of Un-American Activities in 1952 where he ousted many industry professionals who were suspected of being communists.

So that begs the question if it’s possible that Weinstein is trying to learn from his mistakes? Does he think this is a “witch-hunt” as many powerful people seem to believe when anyone accuses them of a crime? The former theory contradicts his nonchalant attitude and seems almost like an admission of guilt, but the latter would be a direct message to the press that he knew would be there that this is a witch-hunt.

Or is it possible that he’s already planning a comeback on the Broadway scene instead of the Hollywood industry that blacklisted him? On the other hand, both biographies were in the queue of likely film projects he would adapt before he was fired from his own production company. How tone deaf would that be if that were accurate? Make a movie about sexual improprieties as some sick and twisted way to justify your actions.

It’s not obvious what kind of message he was sending with carrying those books but the point is that we all know whatever he was doing was disingenuous. Also, this completely contradicts the point and relevance of this article, but who really cares what that message he was attempting to convey.