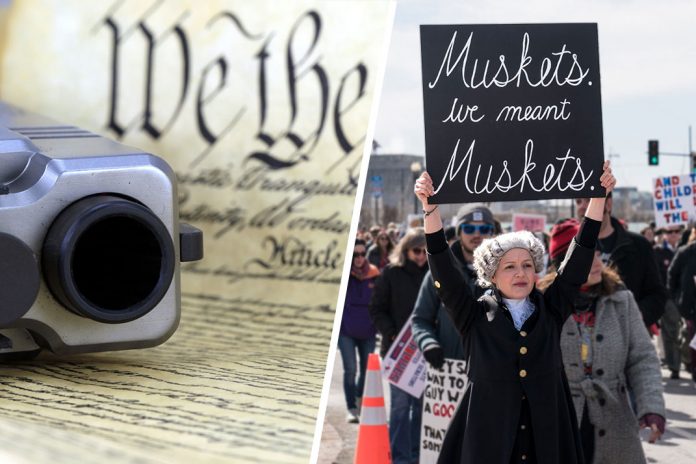 We’re introducing a new format on Free Press Daily News. In support of our slogan, Decide for yourself, we’re offering two viewpoints on a major topic in one article. Please read both and let us know what you think in a comment below. Thank you.
~ Chad Allen, publisher and managing editor

“If you see something, say something,” is a cliché that would’ve worked when it came to Nikolas Cruz who murdered 17 students at Marjory Stoneman Douglas High School in Parkland, Florida in February 2018. Unfortunately, it wouldn’t have worked at Santa Fe High School when Dimitrios Pagourtzis killed 10 people and wounded another 13 because not only did his teachers and parents describe him as quiet and polite, but also his peers couldn’t have imagined he was capable of the unspeakable act.

Tyler Ray, an 18-year-old senior, played football for the Sante Fe Indians with the suspect, who was a defensive tackle on the junior varsity team. At a vigil for the victims in the center of Santa Fe on Friday night, Ray told NPR’s John Burnett that he would have never suspected his former teammate is capable of a mass shooting — he was just joking with the suspect on a field trip to a Galveston water park on Thursday, the day before the massacre.

One day you think you know this kid, you think you can hang out with him, you can joke with him ... And the next day, he's shootin' up the school. You just never know. Click To Tweet

If no one thought Pagourtzis was capable of this heinous act then it’s not a gun issue at all. There is clearly a mental health epidemic that’s not only being ignored, but these mass shooters are hiding their true personalities from the people closest to them.

Nobody thought Stephen Paddock would shoot up a country music concert on the strip of Las Vegas in February, which included his brother, Bruce Paddock, who had no idea he stockpiled guns.

Most sensible advocates of commonsense gun law reform genuinely believe that banning bump stocks and restricting semi-automatic weapons would be an instant fix to the problem but Leah Libresco, a statistician for FiveThirtyEight wrote a piece in The Washington Post in 2017 that explains why it’s not that simple.

Libresco wrote, “My colleagues and I at FiveThirtyEight spent three months analyzing all 33,000 lives ended by guns each year in the United States, and I wound up frustrated in a whole new way. We looked at what interventions might have saved those people, and the case for the policies I’d lobbied for crumbled when I examined the evidence. The best ideas left standing were narrowly tailored interventions to protect subtypes of potential victims, not broad attempts to limit the lethality of guns.

I researched the strictly tightened gun laws in Britain and Australia and concluded that they didn’t prove much about what America’s policy should be. Neither nation experienced drops in mass shootings or other gun related-crime that could be attributed to their buybacks and bans. Mass shootings were too rare in Australia for their absence after the buyback program to be clear evidence of progress. And in both Australia and Britain, the gun restrictions had an ambiguous effect on other gun-related crimes or deaths.

When I looked at the other oft-praised policies, I found out that no gunowner walks into the store to buy an “assault weapon.” It’s an invented classification that includes any semi-automatic that has two or more features, such as a bayonet mount, a rocket-propelled grenade-launcher mount, a folding stock or a pistol grip. But guns are modular, and any hobbyist can easily add these features at home, just as if they were snapping together Legos.”

When Marco Rubio addressed the survivors and victims of the Parkland massacre on CNN the following week, this is what he was referring to when he said once you tighten the loopholes on bump stocks and restrictions on semi-automatic weapons, new loopholes are discovered within minutes of passing the legislation.

Libresco also noted, “As my co-workers and I kept looking at the data, it seemed less and less clear that one broad gun-control restriction could make a big difference. Two-thirds of gun deaths in the United States every year are suicides. Almost no proposed restriction would make it meaningfully harder for people with guns on hand to use them. I couldn’t even answer my most desperate question: If I had a friend who had guns in his home and a history of suicide attempts, was there anything I could do that would help?”

The answer to Libresco’s last question is to address mental illness seriously, not only in hospitals and possibly bringing back more mental hospital institutions, but it needs to be mandatory in every public school in the country. Every student needs to be psychologically assessed on an annual basis.

Mass shootings are a disturbing reality that our scared children are forced to endure and that’s not acceptable. We can all agree on that. But also, as Libresco points out, reforming with a broad stroke completely ignores suicidal deaths and gang violence. Commonsense gun laws could be a solution but it doesn’t get to the heart of the problem. If you want to cut the head off a snake then we need a sweeping assessment of mental health.

“’No Way To Prevent This,’ Says Only Nation Where This Regularly Happens,” was an article published by the famously satirical The Onion back in May 2014. And after single mass shooting, Las Vegas, Parkland and now Santa Fe, The Onion mocks 2nd Amendment defenders by republishing the same article over and over, again and again.

Part of the article reads:

“This was a terrible tragedy, but sometimes these things just happen and there’s nothing anyone can do to stop them,” said North Carolina resident Samuel Wipper, echoing sentiments expressed by tens of millions of individuals who reside in a nation where over half of the world’s deadliest mass shootings have occurred in the past 50 years and whose citizens are 20 times more likely to die of gun violence than those of other developed nations. “It’s a shame, but what can we do? There really wasn’t anything that was going to keep this guy from snapping and killing a lot of people if that’s what he really wanted.”

Another numbing senseless school shooting occurred at Santa Fe High School in Texas that left 10 people killed and wounded 10 more. Suspect Dimitrios Pagourtzis, 17-years-old, had a shotgun, a .38 caliber revolver and explosive devices. The go-to weapon of choice is the easily attainable AR-15, which was used in Parkland, Las Vegas and a majority of high-casualty mass shootings. But if this proves anything, despite the choice of weaponry, it’s that a complete overhaul of the 2nd Amendment is necessary for the safety of our children.

School is supposed to be a safe place, but that sentiment doesn’t exist anymore. Paige Curry’s comments went viral on social media when the Santa Fe High School survivor was asked about whether she was surprised that this happened at her school. “Was there a part of you that was like, ‘This isn’t real, this would not happen in my school?’” a reporter asked. Curry gave a rueful scoff. “No, there wasn’t,” she replied. “It’s been happening everywhere, I’ve always kind of felt like eventually it was going to happen here too.”

The inescapable level of paranoia our children have to deal with it is heartbreaking and the irresponsible NRA and most of the GOP are combating it with the most inane boneheaded excuses to protect the outdated 2nd Amendment. Click To Tweet

The inescapable level of paranoia our children have to deal with it is heartbreaking and the irresponsible NRA and most of the GOP are combating it with the most inane boneheaded excuses to protect the outdated 2nd Amendment. Some of the blame and rationale from conservative politicians wasn’t just dangerously misguided they were downright silly.

Following the shooting, Texas Lieutenant Governor Dan Patrick addressed what he saw as the cause of the problem. “We may have to look at the design of our schools moving forward and retrofitting schools that are already built. And what I mean by that, there are too many entrances and too many exits to our over 8,000 campuses in Texas,” he said. “There aren’t enough people to put a guard at every entrance and exit … but if we can protect a large office building or a courthouse or any major facility, maybe we need to look at limiting the entrances and exits into our schools so that we can have law enforcement looking at the people who come in one or two entrances.” Yeah! Fire safety, who needs it!

Patrick has a website where an entire page is devoted to defending our rights to bear arms. Apparently his solution is that we need door control instead of gun control.

NRA spokespersons were particularly vile with their accusations blaming the media, and inattentive parents and students.

Since the mass shooting at Santa Fe High School 24 hours ago, the @NRA and lawmakers beholden to them have blamed exit doors, poor parenting, inattentive teachers, media, Godlessness and evil for the tragedy.

Meanwhile, Sean Hannity’s “solution” that he echoed on his show, “It’s not a gun issue. Every time it happens, the worse — it’s always a different gun. So that’s not the issue here. The issue here — well, there is some issues with gun safety, you can’t let mentally ill people have guns. Criminals don’t obey the laws by their very nature. We also have to have, every school district needs to have some person that monitor’s every kid’s social media postings, maybe they need two people. This is a reality now that they’re telegraphing what they’re going to do. Terrorists do it. These school shooters do it. “

The irony here is that the solution to the problem is staring Hannity right in the face and he’s choosing to manipulate it for his agenda. It is a gun problem and the solution is to make acquiring these weapons harder through regulation. Not less. Hannity says, “you can’t let mentally ill people have guns,” but in Parkland Florida, Nikolas Cruz had a whole arsenal, including an AR-15.

Disturbingly, they all know that sensible gun reform is the solution, because they know it’s worked in nearly every other civilized nation in the world. And if the GOP in Congress continues to drag their feet on the issue then it will resort to the extreme, which is to repeal and replace all of 2A.

Which viewpoint do you agree with, and why? Let us know in a comment below.