Home Sports & Entertainment Why Twin Peaks: The Return Was One of the Most Groundbreaking Hypnotic... 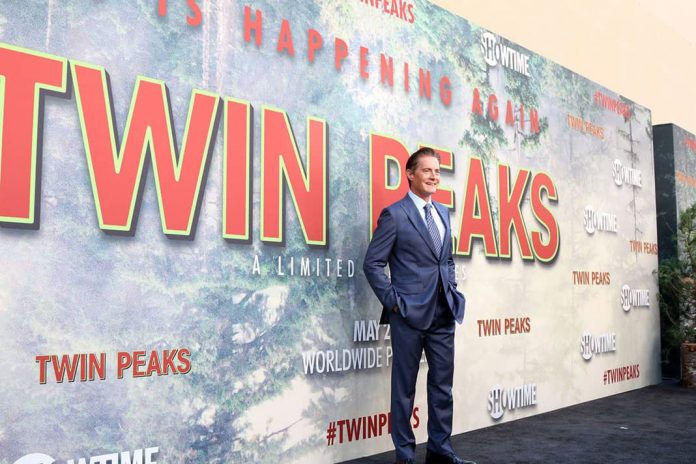 In 1990, Mark Frost and David Lynch created one of the most bizarre “mystery box” television shows – a term coined by director JJ Abrams during a Ted Talk about his smash hit show Lost. Unlike Lost, Twin Peaks’ success was short-lived, canceled after only two seasons, but over time it developed into a massive cult-classic hit.

Lynch has always been one of the most daringly unique directors in the history of the film and television mediums with bizarre outings like Eraserhead, Blue Velvet and Mullholland Drive that ranges from grotesque and freakish to downright peculiar and bizarre.

Picking up 25 years after the end of his original semi-hit show – in the show and in real life – was the 3rd season release, Twin Peaks: The Return, but this time hailed on Showtime rather than ABC. And one thing was abundantly clear in the first ten minutes of the premiere episode – that Lynch and Frost could take this series to limitless bounds because it was on Showtime – taking their story to rating-defying places they clearly could not go due to network television constraints, like censoring Goodfellas or Scarface on TNT.

Twin Peaks: The Return was a massive reunion with nearly all of the original cast returning like Kyle MacLachlan (playing several characters), Sheryl Lee, Miguel Ferrer, Kimmy Robertson, Russ Tamblyn and many others, but there were some outstanding new casting additions that included Robert Forster, Laura Dern, Naomi Watts, Jim Belushi, Tim Roth, Jennifer Jason Leigh and Matthew Lillard. But this latest season was no picnic and so much wildly different than the original seasons.

Sean T. Collins of Rolling Stone Magazine had an excellent analysis of the show hailing it as “the most groundbreaking TV series ever.” He wrote, “To explain why, it’s worth digging deeper than the obvious ways in which the season broke ground: its wild shifts in mood and style, its avant-garde editing and effects, the atom bomb of an hour that was Episode Eight,” Collins wrote. He added, “But just as importantly, this 18-part movie/series/whatsit fits beautifully in Lynch’s overall filmography. Indeed, the more of his work you’ve seen, the better equipped you’ll be to handle what he’s throwing at you here. Particularly in its final episodes, The Return relies on a recursive, Möbius-strip structure, in which events echo and loop rather than proceed in straightforward fashion; these repetitions and reflections are distorted and gap-ridden enough, however, to keep the pattern intoxicatingly opaque.”

Lynch’s filmmaking style through lighting, sound design, music, camera technique, mood and texture, are exclusively unique to him, like a chef’s signature cuisine. And you would be hard-pressed to find any filmmaker who comes remotely close to his style.

Nowhere is Lynch’s uniqueness more obvious than in Twin Peaks: The Return. The storyline was befuddling to even the most loyal Lynch fans – just enough to baffle while just barely keeping together the cohesive binding fabric of the main plot’s through line – if there even was one. But what was truly remarkable, groundbreaking, unprecedented, was how Lynch and Frost infused the gamut of tone and genre into these storylines.

Lynch and Frost successfully blended drama, comedy, horror, and thriller into this one season, while tonally touching on farcical, slapstick and preposterously goofy comedy – then adding intense violence, brutal horror, melodrama and oddball absurdity – moments that will certainly make the viewer, at some point say to themselves “what in the hell just happened?” Any seasoned filmmaker will tell you that tone has to be consistent, otherwise it jarringly sucks you out of the experience, but you can excuse Lynch and Frost from that law of physics defining formula because those rules apparently don’t apply to them.

What Lynch seems to know better than any other filmmaker is that “weird” is an art form all in itself – it’s everlasting. To give you a prime example that embodies this is that some of SNL’s most cherished sketches follow this concept that too strange to comprehend is unforgettable. For instance, two of the most memorable sketches recently were Peter Dinklage’s “Space Pants,” and Tom Hanks’ “David S. Pumpkins.” It was so bizarre that even the characters in the sketch had no idea what was happening. But SNL has a long history of that. Who could forget Phil Hartman’s “Unfrozen Caveman Lawyer?”

But it’s through “weird” that Lynch and Frost are able to accomplish their greatest feat, mixing all of these tonal and genre elements like master magicians. Through all of these elements, I believe Lynch and Frost’s intent was to specifically mess with the viewers’ senses through disorientation.

Twin Peaks: The Return features approximately 25 storylines that run the gamut of tone and genre, and when the episode ends, it’s as if their intention was to use these techniques to leave the audience in complete cognizant disarray. And the only way to achieve that is by disorientating the senses in the same way a hypnotist meddles with your subconscious.

When have you ever seen that before?