Home Liberal The Real Reason Why President Trump and Republicans Want Kavanaugh On the... 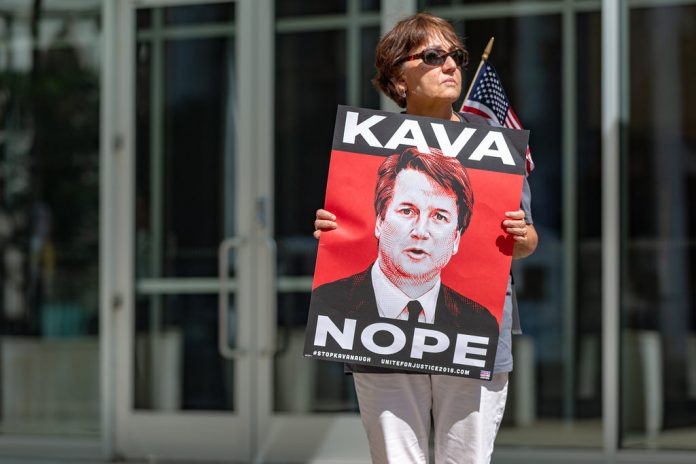 “I’m saying when you’re the president, then that means it’s not illegal,” former President Richard Nixon famously said to David Frost in a post-presidency interview.

The Supreme Court faced a grave decision just a few years before in 1974 in United States v. Nixon, when they required his administration to hand over tape recordings of the Watergate hotel break-in. Nixon’s lawyers argued that the presidency gave him “executive privilege,” to refuse this order.

Nixon’s lawyers argued that the presidency gave him “executive privilege,” to refuse this order

The tapes were turned over. Nixon resigned. The rest is history.

Years later, you understood the disgraced president’s mindset. Unchecked power and above the law.

It goes without saying that President Trump echoes this same sentiment. He once mentioned that the United States of America should have a president for life in response to Chinese President Xi Jinping’s lifetime appointment. Not to mention, the countless “WITCH HUNTS” he posts in response to Special Counsel Robert Mueller’s Russia investigation. If he’s implicated then it’s “Fake News.”

In a 2009 article for the Minnesota Law Review, Kavanaugh wrote that Congress should pass a law that exempts sitting presidents from criminal prosecution or investigation.

“I believe that the president should be excused from some of the burdens of ordinary citizenship while serving in office,” Kavanaugh wrote. “We should not burden a sitting president with civil suits, criminal investigations, or criminal prosecutions.”

Thankfully, Congress did no such thing. Luckily, we have a separation of powers.

This brings us to why Kavanaugh’s ideology in this particular area because it was the exact reason why he wants his nominee confirmed as soon as possible.

This brings us to why Kavanaugh’s ideology

In October, the Supreme Court will rule on Gamble v. United States Docket number 17-646, which is a separate sovereignty exception to the Double Jeopardy Clause of the 5th Amendment.

This would allow both federal and state prosecutors of the same crime to escape each other as “separate sovereigns.”

In layman’s terms, that simply means if a person violates a federal law, if that particular state can prosecute under their laws regardless of what happens at the federal law.

Basically what this “could” potentially entail is that if President Trump decided to pardon anybody associated with the Russian investigation – including his son Donald Trump Jr. and son-in-law Jared Kushner, then they would also escape, for instance, New York prosecution.

It’s no coincidence why Trump chose Kavanaugh, especially when it’s clear his administration did, seemingly, zero due diligence on his nominee.

If they had, then they would’ve uncovered everything the Senate Judiciary Committee uncovered in the last weeks.

That, or, they simply didn’t care. At the end of the day, it’s an unfortunate reality, that Kavanaugh will likely be confirmed regardless of deceit before the committee and the accusations.