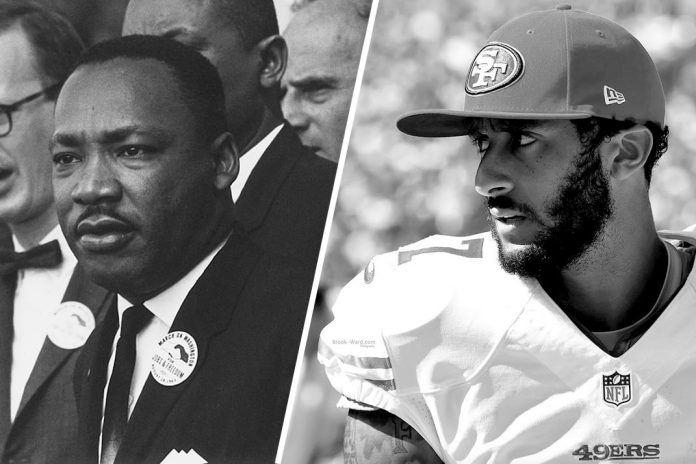 April 4th 2018 marked the 50th anniversary of Dr. Martin Luther King Jr.’s assassination. King’s profound legacy will always be remembered as one of the major turning points in American history, but more importantly it laid the groundwork for future revolutionaries in a seemingly endless pursuit of total racial equality. Although, King famously said, “So I want to turn your attention to this subject: “Loving Your Enemies.” It’s so basic to me because it is a part of my basic philosophical and theological orientation: the whole idea of love, the whole philosophy of love,” at Dexter Avenue Baptist Church in 1957, nearly a decade later he couldn’t preclude his murder by a hateful career-criminal, James Earl Ray.

During the 2015-2016 NFL season, Kaepernick peacefully protested the pre-game National Anthem in what effectively became the “kneel heard round the world.” The outcome came with an immense backlash from the most prideful Americans arguing that his divisive disrespect towards the flag was a blatant attack against any citizen who has risked their lives for our country. Others consider his protest brought light to racial injustice, especially in the wake of countless incidents of police brutality against African Americans. Kaepernick has essentially become one of the most polarizing sports figures in U.S. history, sparking a firestorm of controversy amongst people who interpreted his protest on a deeply personal individual level.

But before the embattled former quarterback became a national sensation, his humble roots indicate that his controversial protests were certainly not meant to be divisive or malicious. Kaepernick is mixed race and was put up for adoption shortly after his birth. A white couple, Rick and Teresa Kaepernick, adopted a five-week old Colin after losing two of their other biological sons to heart defects and were forewarned that he was a “special-needs child.” At eight years old, the future NFL star began playing youth football. But he felt like an outcast because of his self-analysis on being of mixed-race in Turlock, California where less than two percent of the population was African American, causing him to be an introvert and a veracious reader.

Colin carried this into his adulthood where he attended the University of Nevada, still feeling like a pariah within the locker room feeling because of his mixed-race and being raised by a white family. “A lot of white people are racist toward him,” former Nevada teammate John Bender once said of Colin, “but a lot of black people are racist toward him, too.” Consequently, Kaepernick was not the partying type, skipping the club scenes, preferring low-key get-togethers with his teammates.

Once he entered the NFL, as a backup quarterback, Kaepernick stole the starting job from Alex Smith and led the 49ers to a Super Bowl where they lost a close game to the Baltimore Ravens. His numbers slipped in the coming seasons, he became a vegan, lost muscle, and teammates and coaches questioned his desire to play football anymore.

Then during the twilight of former President Obama’s second term, racially charged of police brutality swept the nation, which included Freddie Gray, Eric Garner, Philando Castile, Tamir Rice, Walter Scott and Alton Sterling. At the start of the 2016-2017 season, when Kaepernick’s first kneeled during the National Anthem, Sterling and Castile’s deaths were still fresh in everyone’s minds, only happening a few months prior.

Knowingly using his platform to bring awareness to the cause, his actions backfired causing massive NFL boycotts. Consequently, after the season was over, the 49ers released him and Kaepernick has been jobless ever since. Many players took up the Kaepernick-mantle and continued kneeling, which led to even more boycotts, resulting in games during 2017-2018 season having some of the worst Television ratings and stadium-attendance in a long time, or in some cases like the overall ratings for ESPN’s Monday Night Football, being the worst in the history of the league.

Since then Kaepernick has accused the league of having a slave-owner mentality, suing league and the owners for collusion to keep him out of the NFL. He even showed up to the deposition where he aggressively wore a Kunta Kinte shirt, a character from the novel “Roots: The Saga of an American Family” by Alex Haley, which depicts Kinte as a slave who rejected a name given to him by his master. This begs the question as to whether Kaepernick is not only embracing his new symbol in society, but also perhaps, enjoying it. ESPN analyst Stephen A. Smith recently commented on Kaepernick’s situation, “I think that he loves the fact that he’s been martyred. And he’s more preoccupied with that than being an NFL quarterback. I’m not saying he doesn’t want to be an NFL quarterback, I’m saying that that doesn’t appear to be his priority more than being martyred.”

If that’s the case, which it certainly seems like it is, why would he sue the NFL for collusion if he has no interest of returning? Could it be that he’s just sending a message just to promote his cause? That Kunta Kinte shirt was a hyperbolic accusation considering that he was paid millions of dollars to play the game was his choice. Is there a level of hypocrisy with his message when his original reasoning for kneeling was to bring awareness to police brutality?

That Kunta Kinte shirt was a hyperbolic accusation

When Donald Trump stormed onto the political scene in 2016, whether you agree he’s racist or not, it’s undeniable that a deep-seated racism was unleashed on this country. The Ku Klux Klan and other alt-right who openly have a fear of white dispossession of this country, endorsed Trump, which arguably hijacked Kaepernick’s movement.

So where did Kaepernick stand on the 2016 General Election?

On that Tuesday of the General Election, the San Francisco Chronicle sportswriter Eric Branch asked Kaepernick if he voted and he simply responded, “No.” In a follow-up, Branch possibly assuming that his schedule didn’t permit him from heading down to the voting booths, he asked if he planned to cast his ballot later, again he reiterated, “No.”

Whether you regard this as hypocrisy comes down to whether you believe change actually does come from participating in political arena. But do you think Martin Luther King Jr. would’ve been disappointed by his decision? Kaepernick is insinuating that voting isn’t important. Even Malcolm X once said, “The black man in the black community has to be re-educated into the science of politics so he will know what politics is supposed to bring him in return,” in 1964 at Cory Methodist Church. Black female voters were key in an alarmingly close 2017 Alabama Senate race between Democrat Doug Jones and Republican Roy Moore. If those black female voters were apathetic, like Kaepernick, then we would’ve been stuck with Moore, an accused pedophile.

We would’ve been stuck with Moore, an accused pedophile.

A bad precedent was set when Kaepernick simply said, “No.” He’s considered an iconic figure in American society and his young adoring fans are going to emulate his character whether he realized that at the time or not. Nonetheless, that one thing does not discount the totality of his activism.

It’s also been alleged that Martin Luther King Jr. had a series of affairs while he was married. When the National Archives released more than 600 new records in November, one document entitled “Martin Luther King Jr. A Current Analysis,” which was a comprehensive compilation of his associates and also revealed that he had a series of affairs that were “unnatural” and “abnormal.” King has always been an American icon and infidelity does tarnish his legacy as a loyal family man, but certainly not in the way he affected the Civil Rights movement.

But a jobless Kaepernick affects social change by donating millions to a slew of charities. Will Kaepernick’s legacy have the same levity as Martin Luther King Jr.s?” No, that’s an unfair comparison, but he has inspired millions to “stand up” in the face of inequality; even he sacrificed his career to bring awareness to the cause.