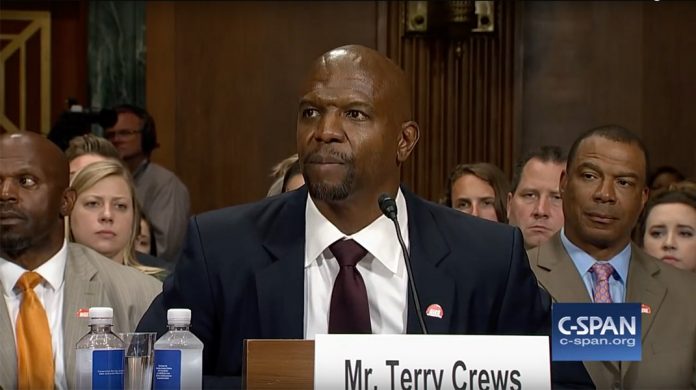 You’d probably recognize the charismatic Terry Crews from the slew of projects he’s worked on in Hollywood, from playing President Camacho in Idiocracy, to Terry Jeffords in Brooklyn Nine-Nine, to the pectoral flexing shirtless character in those bizarre Old Spice commercials. He’s the magnetically hilarious African American actor whose persona is so instantly likeable that it would take a soulless person to think otherwise.

When the Me Too Movement began sweeping the country, it was predominantly powerful men who exposed for preying on young females, except in Kevin Spacey’s case where he allegedly sexually assaulted male boys – one of them being Richard Dreyfuss’ son who was fourteen years old at the time.

You’d never in a million years suspect that Crews, the 6’ 3” 245 pound incredibly muscular former NFL player, would be the victim of sexual assault.

But in October of last year, Crews tweeted about a sexual assault experience with a powerful individual — it was clear that he was still emotionally distraught.

This whole thing with Harvey Weinstein is giving me PTSD. Why? Because this kind of thing happened to ME. (1/Cont.)

The foresight for his reasoning to come out at that time was mature, Crews told NPR, “I remember just feeling like ‘No, somebody’s got to support them. Somebody’s got to back these people up, because they’re about to get shamed. They’re about to get thrown to the wolves.’ And I said, ‘I’ve got to back these women up because they are going through the toughest time in their life, and it happened to me.’ That was the big thing, I had to describe what it feels like — why should you come forward?”

More importantly, the reason why it was imperative to come forward with these allegations is because it could happen to someone of his size and stature. It’s not just about validating all of the women that came forward; it’s not about these protecting accusers that are going to be shamed as liars from some people. It’s that nobody would expect Terry Crews

It turned out that person he was referring to is a high-powered agent and producer at one of the largest agencies in Hollywood. He went up to him at a party and just grabbed his crotch right in front of his wife.

Eight months after coming forward with these allegations on Twitter, Crews gave an emotional testimony about why he didn’t retaliate with violence – and he could almost certainly smash anyone in Hollywood to a bloody pulp – and his reasoning was rather heartbreaking.

Terry Crews shared some powerful words during his testimony before the Senate Judiciary Committee on sexual assault legislation. pic.twitter.com/AYBEtl3Drs

When Crews was asked why he didn’t go with his first instincts to be violent towards the accused, he responded, “As a black man in America…” And we all know exactly what he was suggesting before he finished his thought. Just like those brave women who’ve thankfully found the courage to speak out against Harvey Weinstein, Bill Cosby and Louis CK, they are terrified that nobody will believe them because they don’t have the benefit of being a white male in America.

Crews also talked about toxic masculinity in our culture, which was a staggering admission coming from maybe the most seemingly masculine actor in all of Hollywood.

Unfortunately, Crews has been accused of being racist and a misogynist in the wake of his original tweet in October and and after his recent congressional speech.

Why didn’t you say something?

Why didn’t you push him off?

Why didn’t you cuss him out?

Why didn’t you tell the police?

Why didn’t you press charges?

Why did you just let it happen?

Why didn’t you beat him up?

I’m called homophobic because I did not want to be molested.

I’m called transphobic because I asked a question comparing gender and race.

I’m called homosexual because I came forward with my story.

Call me what you want.

I love them all. https://t.co/m84GeUSjWz

Crews emotional speech should be an inspiration for those who feel helpless to speak out and not read into the context like he was somehow trying to take away from the mentally and sexually abused courageous women who were terrified to their stories. The speech left most of the Senate Judiciary Committee speechless because it seems so unlikely that it would happen to someone like Crews.