Deprecated: Function create_function() is deprecated in /home/customer/www/freepressdailynews.com/public_html/wp-content/themes/Newspaper/includes/widgets/td_page_builder_widgets.php on line 7
 “If You See Something, Say Something,” Then Say It Again and Again - Free Press Daily News
Saturday, April 10, 2021

Home Moderate Center Left “If You See Something, Say Something,” Then Say It Again and Again 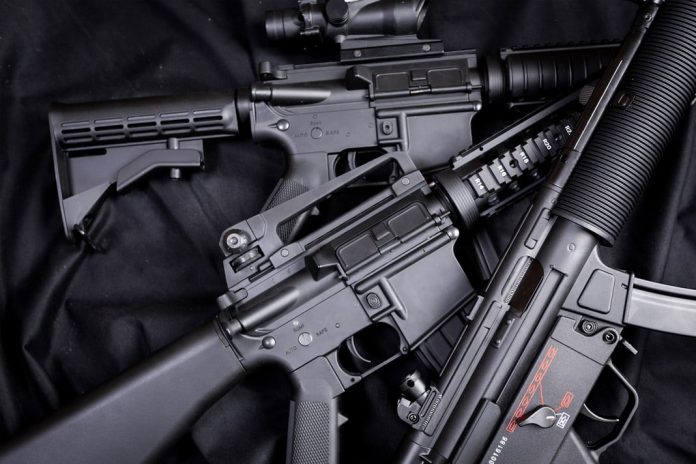 Gun ownership is embedded in the American culture. It started with muskets and bayonets for protection against domestic and foreign powers and outright lawlessness by criminals. Like the Wright Brothers first flight evolving into sophisticated fighter jets, we now have semi-automatic assault rifles and pistols for public purchase restricted, and allegedly enforced by federal and state laws. These weapons were made for military operations and police protection, not civilian use or domestic protection. Unfortunately, these weapons are now in the hands of not only law-abiding citizens, but also hate filled criminals and the mentally deranged.

After each massacre, devastated families, survivors, witnesses and our nation pray the words “no more” — yet mass shootings have continued to plague the U.S. for over 50 years.

Some blame Congress for lack of enacting more laws restricting gun sales and ownership. Others say more gun laws will not stop the criminal intent on killing and breaking law. The other argument is the Second Amendment Right for law-abiding citizens is necessary to combat enemies foreign and domestic. This debate continues to go around endlessly in circles and must come to an end.

Focusing on these tragic events, the puzzle is how can gun access be denied to those with evil intentions?

On December 19, 2016, an amendment submitted by the Social Security Administration was implemented into law relating to the National Instant Criminal Background System (NICS) Improvement Amendments Act of 2007. Former President Barack Obama recommended the now-nullified regulation in a 2013 memo following the mass shooting at Sandy Hook Elementary School on December 14, 2012, which left 20 first graders and six others dead. This ruling allowed the Social Security Administration to identify all SSA payees with a financial mental disability, estimated at 75,000, to be entered into the NICS database for potential rejection of gun ownership.

But President Trump rolled back this regulation on February 28, 2017 because of Executive overreach with support and recommendation by the ACLU that people receiving Social Security checks who need financial help due to mental illness does not mean they have evil on their mind and should be denied any Constitutional right like gun ownership. The way NBC reported this ludicrous nonsense – Trump Signs Bill Revoking Obama-Era Gun Checks For People With Mental Illnesses on February 28, 2017 – was designed to make Trump seem like the bad guy and Obama look like he did something substantial preventing further massacres like Sandy Hook. Does anyone think Nikolas Cruz was collecting Social Security? If our Executive Office thinks mental instability of seniors is first priority, they have run out of options.

If we demand full government protection of innocent life from mentally deranged people, then we will be saying yes to government surveillance and unmasking of U.S. citizens, loss of some constitutional rights, and possible confiscation of weapons used for personal protection by law abiding citizens. One could argue that this gives too much power to the federal government, which can be easily abused. There must be another way.

Instead of government surveillance, we need more people surveillance. We have heard the saying “if you see something, say something.” However, many people are reluctant to do this because it may cause unwanted attention to themselves and possible retribution from neighbors, fellow students and others if there is no real cause. Another conundrum, if one never goes to see a doctor, who is going to ever report a person’s mental fitness? The former is a personal decision that can actually silence the moment, but the latter is obvious and demands everyone’s attention.

Mental illness is an instability that doesn’t necessarily mean that individual will commit heinous acts. But when combined with other characteristics like suicidal tendency, depression, derogatory and inflammatory speech, violence and threats, and access to weapons, this needs to meet up with mental health diagnosis and professional help. All of these applied to Nikolas Cruz specifically. Taking individual action with appropriate authorities can make a huge difference in subverting violent behavior. Unfortunately, initial reports allege that the local police and Miami FBI dropped the ball when he was reported. Although local police visited him over 20 times for various complaints, nothing was done. The entire community around Cruz saw something and said something, but he was still unrestrained by local police to walk the streets. The FBI received a tip from Ben Bennight, a bail bondsman, alerted to the FBI that Cruz posted a YouTube video that he wanted to be “a professional school shooter,” but the FBI didn’t investigate any further. From the local police to the FBI, this exhibited an unforgivable and grievous malfeasance on their part. How could they not know that he purchased an AR-15 and other weapons? Why weren’t his social media threats taken seriously? The law enforcement is to blame for the gross negligence of this age-old rule, but that doesn’t mean that a massive overhaul needs to be mandated nationwide because they ignored the severity of Cruz being a threat.

We must demand enforcement of the background check requirements prior to the sale of firearms and circumvent gun show loopholes. This will help to prevent black market sales but it won’t stop it because for the right price, you can buy anything. These background checks should be similar to an extensive federal employment background check, and it should paid for by the weapon purchaser. Retailers must be monitored and those who ignore this law should be prosecuted. Cruz should have never been able to legally purchase an AR-15 from Sunrise Tactical Supply in February 2017. The store has since been closed indefinitely and the distraught owners have allegedly hired a lawyer and left town.

Bottom line, families are the building block of every society. Unfortunately for Cruz, he’s been in the Foster care system for much of his life. His current Foster parents, James and Kimberly Snead were fully aware of his arsenal that included an AR-15 and two other assault rifles. Kimberley told the Sun-Sentinel “We had this monster living under our roof and we didn’t know. We didn’t see this side of him,” and then James Snead – a military intelligence analyst and decorated war veteran – chimed in “Everything everybody seems to know, we didn’t know. It’s as simple as that.” Assuming they are being honest, it’s clear that Cruz lived two separate lives; the person his Foster parents knew and the one countless students and teachers knew. The question then becomes; why and how didn’t they know. Why didn’t anyone tell the parents? Something isn’t adding up here, especially when you consider that the local police visited the house over 20 times. More information will come out soon, but in the meantime, don’t let the failure of “if you see something, say something,” in this particular case deter you from speaking up. And if the police don’t take it seriously, tell people close to that individual. Keep talking. Keep saying something.