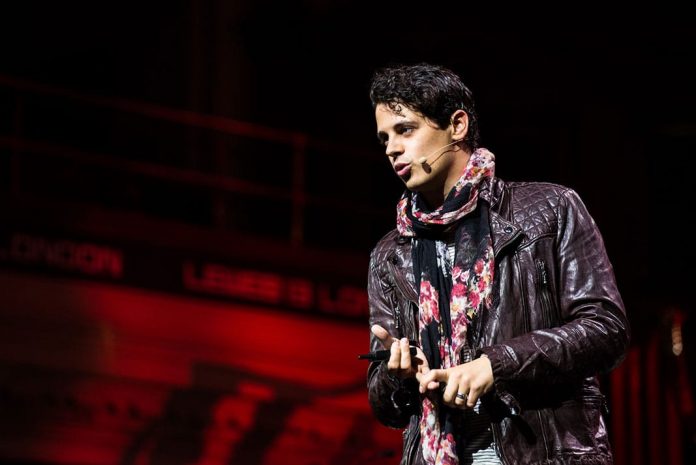 By now you’ve probably heard of the self-proclaimed “fabulous super-villain of the Internet,” a 31-year-old insufferable homosexual Brit, Milo Yiannopoulos. Once the Senior Editor of the alt-right propaganda machine Breitbart, in February 2017, he was forced to resign amid his unapologetic support for pedophilia – suggesting that 13-year-old boys and adult men should be able to consent.

Apparently, that was the comment that was too extreme for Breitbart.

Yiannopoulos’ bigoted views include that fat people should be deported – rape culture and Harry Potter are both fantasy – he mocks the LGBTQ community regularly and intentionally provokes anger against raging feminists.

The far-right shill’s ultimate motive behind his needling tactics is to advocate the importance of free speech – and he’ll seemingly martyr himself in pursuit of it through hyperbole as if he’s daring someone to attempt an assassination against him – like the character John Doe in the movie Se7en, it would be a part of his ultimate plan.

Whilst he has all the attributes of a stereotypical flamboyant homosexual – down to his gaudy clothes and overall stereotypical gay-man demeanor – he strongly dislikes homosexuals.

But how did he become so wildly popular in the alt-right?

It seems to be an enemy-of-my-enemy-is-my-friend mentality, ridiculing liberals’ ideologies is probably comical to most that despise them, but maybe his intrigue to a base that despises his lifestyle is much more deeply psychological – like an absurd unrealistic movie character whose only design is to make you laugh.

In June of 2017, Yiannopoulos penned an article for Breitbart entitled “Gay Rights Have Made Us Dumber, It’s Time To Get Back In The Closet,” with his opening line being “The endless celebration and mollycoddling of homosexuals in the media has transformed the genteel, camp rightsists of the 1950s into brash, glitter-drenched Pride queens. If for no other reasons than manners and aesthetics, we ought to think about shoving the next generation back into Narnia.”

And this is the kind of hateful rhetoric he perpetuates like a villainous caricature, using language as his arsenal to fool people into thinking he’s a real person; and in that way Jim Carrey’s bombastically over-the-top portrayal of Ace Ventura in Ace Ventura; Pet Detective ironically has much more subtle nuances in his performance.

And to be fair, though, he’s damn good at playing it because he has his entire conservative alt-right following fooled, but more importantly Yiannopoulos has got the safe-space university liberals triggered, pulling their hair out in rage over his very existence.

But the problem is those liberals are feeding into his antagonism perfectly because every time U.C. Berkeley cancels one of his scheduled appearances, he sells more books while making these furious students look like an unhinged irrational hate-group.

Not only do fellow homosexuals disgust him, but he’s also Jewish through his maternal grandmother and according to emails that BuzzFeed discovered, he has edited work for neo-Nazi websites like Daily Stormer’s Andrew Auernheimer, “feudalist” Curtis Yarvin and white nationalist Devin Saucier.

Does any of that hypocrisy sound like this is a real person?

But instead of calling him unreasonable and delusional or a person with a psychological disorder, it’s more likely that this is all by design – for the money.