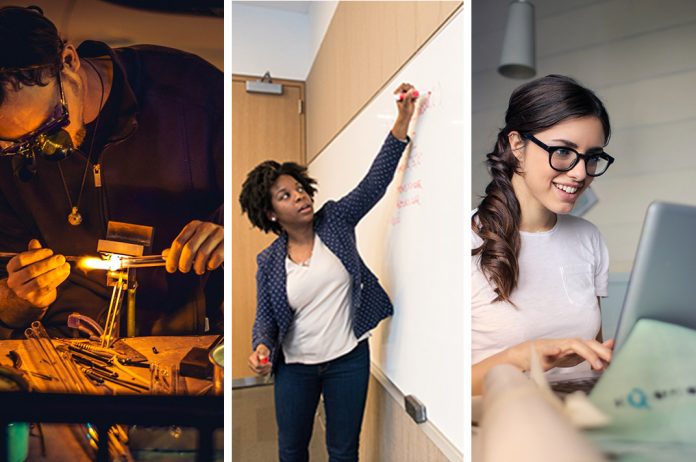 Twitter has evolved into a polarizing wasteland of vitriol, hyperbole and screaming matches. What exactly did you expect when you allow Nazis, white supremacists and progressive activist on the same platform where they can interact with each other?

ESPN analyst Jemele Hill was one of those that experienced such an extreme backlash for a Tweet she made about President Trump, when Hill called him a “white supremacist,” late last year. That comment caused Hill to be suspended, forced her to publicly apologize and several months later she left her anchor position at SC6 to work as a columnist for The Undefeated — subsidiary of ESPN.

But every once in a while you’ll find something genuinely wholesome on Twitter. Something that’ll give you hope in humanity. Or in this case, something that revealed a deep insight into how other person initially perceives your profession.

Oftentimes, when someone tells you what someone does for a living, your first instinct is to use personal experience to put it into perspective. You’re a writer? Oh, I’ve thought about being a professional writer as well, I just didn’t have enough time to do it? The malice is likely not intentional, but essentially what they’re implying is your job is much easier than theirs. How degrading is that? To be clear, the reason why it was wholesome is because the thread was a community of people coming together to understand and empathize with different walks of life.

That proposed question that garnered responses from a vast range of people was from “Louie” – an icon designer from Oregon – asked, “What’s something that seems obvious within your profession, but the general public seems to misunderstand?”

What‘s something that seems obvious within your profession, but the general public seems to misunderstand?

Sports journalists don’t care if your team wins or loses. We root for what gets us home faster, and what creates less work. https://t.co/lM1wA4djkX

At first her tweet received a lot of backlash because her role in journalism is a coveted one that’s undoubtedly hard to come by, but after explaining her position it was quite clear that this was a classic case of “the grass is always greener on the other side.” Sometimes people just want to go home to their families. What’s pleasure to you could just become work over time, especially when it’s not their team playing.

1. If we talk about your team being bad, it is not because we ‘hate’ them. It’s because they are, um, losing lots of games. If they start winning more, we’ll *happily* talk about how they dug out & got good. (Still won’t mean we were wrong that they were bad, when they were bad) https://t.co/HPL18dQjGd

2. If we talk about a player being likely to go somewhere in free agency, it’s not because we ‘want’ them to leave, or we are ‘dying to’ have them in a particular market. It’s because we’ve done actual reporting on what guys are planning, and it’s our job to, well, report it. https://t.co/HPL18dQjGd

Homerism is a powerful drug. The moment someone puts your team down it feels like they’re attacking your soul. It’s not that way though. For them, they have to be objective.

Seth Rogen’s response was so painfully obvious, but it needed to be said because people who live outside of Los Angeles have this grand idea of what is celebrity and that’s usually the hit HBO show Entourage.

Entourage is not realistic.

You also had professionals from many backgrounds who chimed in on the thread and many of them were truly fascinating.

This answer from Lee Deininger – a microbiology student – might be the most enthralling of all answers.

Fungi are 1) not plants & 2) not just mushrooms.
Fungi are closer to animals than anything else & mushrooms = reproductive structure; The actual THING is a network that can span (literally) miles!
It’s like pointing to a flower on a tree and saying “here’s the whole plant!”

The same user actually posted an incredibly bizarre picture that looks like two soldiers trekking through Vietnam, but they are in fact, mushrooms.

But this tweet from Kim Harding – a postgraduate working on her PhD – is debatable.

Hearing someone use “impact” as a verb is can make you cringe like nails on a chalkboard. For instance, “the two cars impacted each other,” or “this player impacted the game,” it’s jarring, unnecessary and proves that the amount of words in your lexicon is limited.

On the other hand, the dictionary is always evolving whether one likes it or not. One of the worst examples of this is the word “literally.” In August 2013, “literally” became the most misused word in the English language, so much so, that they changed the definition to include “figuratively” as well. Basically, the definition was amended because the majority was undereducated.

Although Harding has a point, “impact” might soon fall into that category.

Do you hate Human Resource departments and the people that work there? Carrie M seems to have a disdain for them despite being one.

Entourage is not realistic.

“Still lost in Westworld” is a former newspaper reporter at Daily Press.

Local news reporters do not cover POTUS. They do cover city hall, crime, military, local economy, etc. They do not get paid more for controversial stories, but will be unemployed, and your local gov’t left unchallenged, if you don’t subscribe to digital editions and support them.

Programming has far less to do with math than people think. I am bad at math but I am great at language and associative thinking.

Not to mention this feeds into the stereotype of girls not being good at programming because they are not good at math. (both are nonsense of course)

Yikes. Under regulation when lives are at stake is not a good thing.

The folks who write the software that controls self-driving cars and medical devices go thru less training and certification than the people who cut your hair.

This one is fascinating and also true. In fact, taxing highways – tolls – is a better way to help congestion because travel behavior is dictated by capacity, time of day, etc.

What’s wholesome about these answers is squashing the delusion someone has that they know exactly what your life is and that they could probably do your job just as well as you do.

Rogen’s comment drives this point home because it’s not all fun and games when Vince just shows up on set with his lines half memorized. Comedy is the serious art form of being funny.