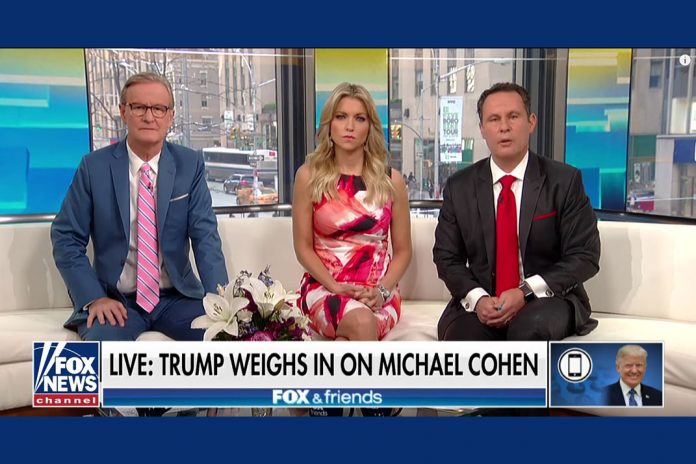 Deprecated: Function create_function() is deprecated in /home/freepre8/public_html/wp-content/plugins/wp-spamshield/wp-spamshield.php on line 2033


Not long ago, President Trump’s personal attorney, Michael Cohen, revealed to a courtroom that his “secret” third client was none other than Sean Hannity. After Hannity failed to disclose this information that was a clear conflict of interest, Fox News was forced to make a decision between any semblance of journalistic integrity and their cash cow superstar talking head. They chose the latter.

Inching closer to being a state-run news entity where lying by omission is commonplace and the praise of President Trump despite his numerous lies is unbearable, Fox News is the go-to place for mainstream conservative bias.

But wait, not so fast.

In the last week, Fox News has been surprisingly critical of President Trump amid the lies that have come out of the Stormy Daniels controversy and the numerous amounts of lies that they seem to be fed up with. To be fair, just before Fox News chose to defend Hannity instead of ousting him, the network extended the contract of journalist Shepard Smith, who is by all accounts, the most critical analyst of Trump on the pro-Trump network.

Fox News chose to defend Hannity instead of ousting him

President Trump recently had a phone-interview on “Fox and Friends” where he yammered incoherently for approximately 30 minutes before finally being booted from the airwaves with an anecdote that he’s the president and probably has “a million things to do.”

This was a picture of the start of that interview and then the co-hosts’ defeated end of it after they pleaded to get off the phone with him.

A picture is worth a thousand words pic.twitter.com/aw2eDmLEYl

He was unwieldy and unhinged, which is much like the events that have followed since that interview. Trump recently hired longtime friend and former Mayor of New York City, Rudy Giuliani, to be the cleanup crew.

Well, Giuliani had a bit of an airhead moment on Hannity recently where he disclosed that Trump was not only aware of the $130,000 Stormy Daniels hush money, but he also reimbursed Cohen – meaning that he knew all along, even though he had said otherwise.

But Fox News wasn’t having it.

Neil Cavuto said it best, but was still a bit light on the message because he would call out his lies and then say stuff like “it doesn’t make you an evil person.”

Even Fox News frequent guest, Alan Dershowitz, was staunch on not defending Trump.

Cavuto’s comments were certainly the most surprising given Fox News allegiance to the Trump administration’s agenda.