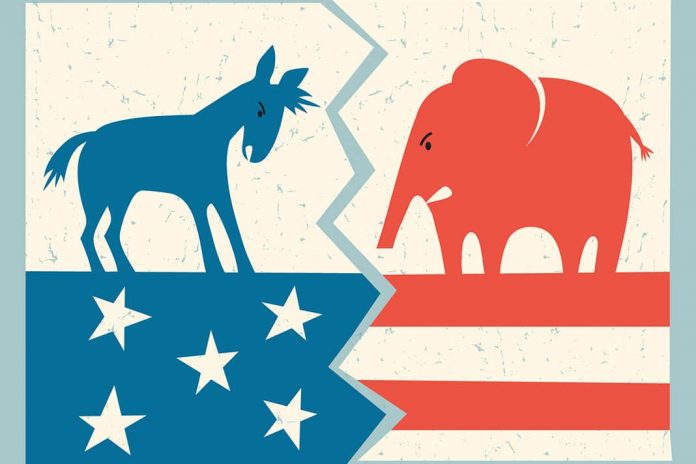 Republicans vs. Democrats – an archaic concept about two polarizing opposites whose intense contempt for each other always reigns supreme over the consideration that we are all Americans and play for the same team. This venomous contentious vitriol between both parties right now might be the worst it has ever been with the emergence of Donald Trump, but some of our Founding Fathers predicted it as being inevitable.

President John Adams once expressed his disdain for the two-party system by saying, “There is nothing which I dread so much as a division of the republic into two great parties, each arranged under its leader, and concerting measures in opposition to each other. This, in my humble apprehension, is to be dreaded as the greatest political evil under our Constitution.”

Nobody despised the idea of a two-party political divide than President George Washington, warning in his farewell speech: “The alternate domination of one faction over another, sharpened by the spirit of revenge, natural to party dissension, which in different ages and countries has perpetrated the most horrid enormities, is itself a frightful despotism. But this leads at length to a more formal and permanent despotism. The disorders and miseries, which result, gradually incline the minds of men to seek security and repose in the absolute power of an individual; and sooner or later the chief of some prevailing faction, more able or more fortunate than his competitors, turns this disposition to the purposes of his own elevation, on the ruins of Public Liberty. Without looking forward to an extremity of this kind, (which nevertheless ought not to be entirely out of sight,) the common and continual mischiefs of the spirit of party are sufficient to make it the interest and duty of a wise people to discourage and restrain it. It serves always to distract the Public Councils, and enfeeble the Public Administration. It agitates the Community with ill-founded jealousies and false alarms; kindles the animosity of one part against another, foments occasionally riot and insurrection. It opens the door to foreign influence and corruption, which find a facilitated access to the government itself through the channels of party passions. Thus the policy and the will of one country are subjected to the policy and will of another. There is an opinion, that parties in free countries are useful checks upon the administration of the Government, and serve to keep alive the spirit of Liberty. This within certain limits is probably true; and in Governments of a Monarchical cast, Patriotism may look with indulgence, if not with favor, upon the spirit of party.”

On the other hand, some of the Founding Fathers rejected the idea of a simple majority vote, which is why we’re stuck in this free-flowing schizophrenic pendulum of political ideology.

As most political scholars would argue, the two-party system is unfortunately inescapable. Change often happens within the party where the lines shift, like when it occurred in the 1860’s and 1960’s during the backdrops of The Civil War and The Civil Rights Movement, respectively. Like a boomerang, no matter how far the parties veer off it always comes back and realigns. This is happening right now within the Republican National Committee (RNC) because they have readjusted around the Donald Trump. Five years ago, Mitt Romney – for all intents and purposes – was the future and now former RNC leaders like Romney and the Bushes have been outspoken in their opposition towards the new direction – to the point where it’s brought the Republican traditionalists closer to their longstanding Democratic foes. Even far-right institutions like Breitbart are trying to depose current GOP leadership. Even former presidential hopeful, Senator Bernie Sanders, was on the verge of revolutionizing the Democratic Party by pushing it to its liberal brinks, but he came up just short. Diehard Sanders were furious at the Democratic National Committee (DNC) when they learned of the collusion within the party to oust Sanders in favor of his opponent, Hillary Clinton.

But the problem is that the two-party system as the collective major power is the lamentable natural order and you can point to minuscule third party entities like Libertarians and the Green Party as prime examples that there is no real competitive threat to Republicans and Democrats. Tearing down and reforming the ideologies is crucial to a healthy progression, but as these parties remain the same they move further apart, forcing leaders of the respective parties to become more divisive and drag Americans along for the ride.

So, how can we dispel this tragic state of America’s political divide? The most problematic issue is that many Republican and Democratic voters proudly hide under the umbrella of their respective parties’ policies as if they agree with every single outlook. It’s as if there is no such person as a liberal who supports the right to bear arms and it’s as if there is no such person as a pro-choice conservative. Is this so inconceivable or could it possibly be that this is a misconception perpetuated by the media to alienate moderates by making it seem like “all liberals” and “all conservatives” have the exact same beliefs, which allows talking-heads (primarily on 24-hour news networks) to bottle the opposition and sadly many viewers are too impressionable, even vulnerable to it.

If we were to somehow eradicate both parties it would not only create a more informed voter, but the ones who actually care to participate in the process would become more fully involved because they would be forced to pay attention to the candidate’s beliefs instead of supporting them under an umbrella. When a candidate runs under the Republican ticket, you can assume that they’re for the most basic stereotypical conservative principles like pro-life, right to bear arms, reduction in taxes, etc.

Most importantly, if we were to eradicate the two-party system then the uninformed and casual voters might not bother to hit the booth come Election Day. This isn’t to say that some people shouldn’t be allowed to vote, but we shouldn’t force people to vote on issues that they know nothing nor care about.

The answer to this riddle of how to abolish Republicans and Democrats is quite nearly impossible, but if we were to live in a Democracy without labels, then that would lead to a healthy inclusive America.