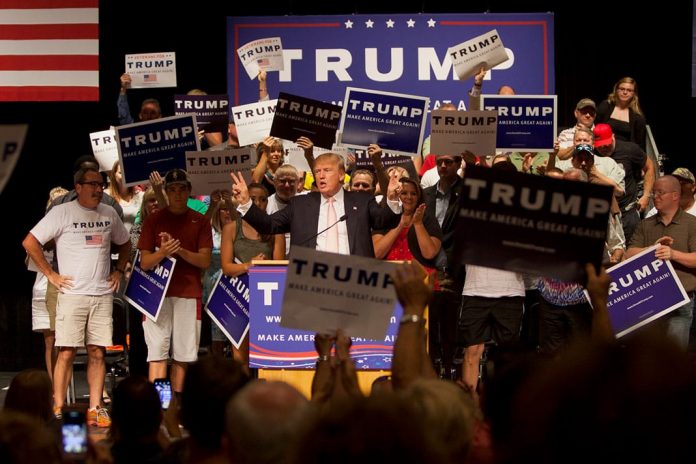 For now, this is Donald Trump’s America but it’s important to compartmentalize the events unfolding right now in the context of history. There is a common psychological tactic called “gaslighting,” – it’s a form of manipulation to ultimately trick an individual into questioning their perception of reality – or in worse cases – their sanity.

Some of the techniques used to gaslight an individual, or a particular group, are to tell blatant lies, deny the lie when caught and even if you have proof that it is, wear you down over time and overload you with misinformation to the point of confusion and being dumbfounded; actions that do not match their words, false positive reinforcement and projecting to others that you’re the one who is insane.

Trump and his administration are utilizing all of these techniques for purposes of unquestionable obedience and unbridled power to fulfill his agenda. Some of these lies are perplexing and ridiculous because not only do most people already know they are vehemently false but the administration acts as if they are absolute.

The first major sign during the Trump administration that had everyone scratching their heads was a white lie, fueled by a sensitive narcissist’s ego, when Trump made his former press secretary Sean Spicer lie about the size of the crowd for his inauguration day that it was the biggest of any president ever.

This spawned the ludicrous creation of “alternative facts,” by senior advisor Kellyanne Conway, which was the first sign of gaslighting – inventing definitions out of the thin blue air. To be clear, this isn’t the same as being misled or possibly disagreeing with multiple intelligence sources like whether Saddam Hussein actually had weapons of mass destruction following the horrific 9/11 terrorist attacks. No, “alternative facts” are compulsive lies to fit a strict narrative, playing fast and incredibly loose that Trump is always right.

There’s no humility and you’ll never hear an apology about any wrongdoing because if it’s not true then it wasn’t him, and if it was Trump then it’s everyone else’s fault. Worst than that, is that there is no recourse because if he continues to ride the “fake news” train, he can deny and excuse his way out of circumstances.

New Press Secretary Sarah Huckabee Sanders recently had the audacity to tell media outlets that they “have a responsibility to tell the truth,” in response to the NBC News report that Secretary of State Rex Tillerson called President Trump a “moron.”

Now, does the mainstream media concoct stories out of thin air with anonymous sources to fulfill their narrative, creating distrust? Of course it happens all of the time. But the White House is actually implying that they are the ones who are truthful and that is yet another gaslighting tactic, and thus also implying is that the White House shouldn’t be held to the same ethical standards.

Following the indictments of former campaign manager Paul Manafort and White House aide Rick Gates, Press Secretary Sanders had the audacity to say that the indictments handed down “had nothing to do with the president” and “everything to do with the Clinton campaign.” This is not a classic case of pivoting; this is the epitome of gaslighting because there is no way that they actually believe that nonsense, but if they can put a seed of doubt, then they’ve succeeded in convoluting the issue.

And as long as the Trump administration can create a façade around “fake news” then anything that is said can be arguably disproven because of the creation of mistrust – sometimes credible but mostly not. Although, sometimes you catch Trump in a provable lie on camera like when he defended the failure of the latest health care bill and said that a senator was in the hospital so they were waiting on him to return to Capitol Hill. It’s not clear whether the president was referring to Thad Cochran (R-MS), but his office had to clarify that he wasn’t in the hospital and recuperating in his home.

Was Trump fed false information or did he make it up on the fly?

One aide told The Daily Beast in response to that false claim that the president was, “just, you know, doing his thing.” That language implies that he knew he was lying, which means it’s malicious manipulation. And can the media or the America public have any recourse against this gross misinformation?

No. That’s the issue.

Many mainstream media outlets have articles with lists of his egregious lies. The Daily Wire wrote an article on April 11, 2016 before he was the Republican nominee entitled “Lyin’ Donald: 101 Of Trump’s Greatest Lies.” Another detailed piece in the New York Times on June 22nd, 2017 was entitled “Trump’s Lies,” by David Leonhardt and Stuart A. Thompson.

Now, is Trump the only president that has ever lied? We all know that’s not true, but Trump’s are wildly out of control where gaslighting comes into play. It’s this notion that nothing means anything and vice versa. No accountability and zero repercussions; it’s full fledge chaos and surreal.

But what will come out of this is even more dangerous because diehard Trump supporters refuse to believe any negative criticism – same with Hillary Clinton’s –about any of his policies or his “so-called” lies.

Refusal to acknowledge any negative criticism is exactly how divisiveness plays into the Trump administrations’ hands – because they have their base fooled that everyone is against them and all he wants to do is “Make America Great Again.” See? They’re not being fair! Poor me.

Unfortunately there are some that buy into his delusions with unwavering support. On the other hand, there are others who see right through demented lies and its important for those people to constantly remind ones who are falling under the spell of Trump’s gaslighting techniques that they’re not crazy.