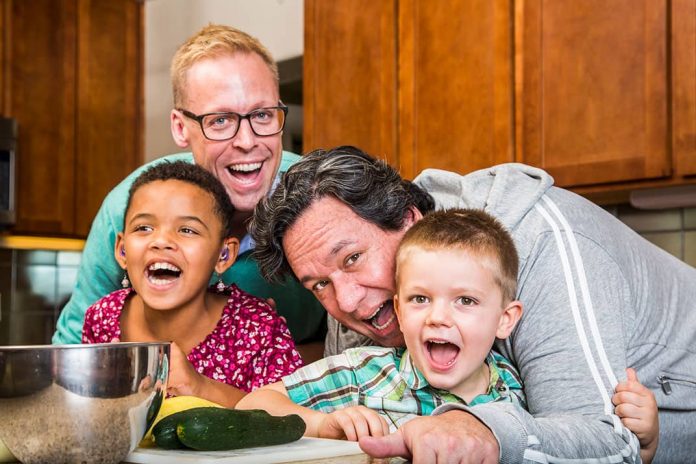 There is a lot to unpack here from my colleague, but here goes.

Undoubtedly, values and “adolescent training/discipline” begins with family values but it’s not exclusive to a “father and a mother.” What Mr. Strong fails to realize is that parental figures can come from anywhere and especially when you consider the different socioeconomic backgrounds that some children have no choice to embrace.

Mr. Strong only identifies families as being the stereotypical husband and wife paradigm, but many children are not so fortunate. Parental guidance and disciplines can come from grandparents, older siblings, teachers, community church leaders and foster/adopted parents. Also, “a father and a mother” could easily be “a mother and a mother” or, “a father and a father.” So, yes, family is the “building block of society” but his definition of a family is obtuse.

More Than One Paradigm

And that’s what’s most disingenuous about Mr. Strong’s piece because he calls out “dissenters with a different set of values” as that there is only one paradigm to raise children and there’s no hope for anybody else and he does it as if to discount a child’s resilience to overcome obstacles of a proper American family. This notion that a child is responsible for being “in this place, at this time” is not entirely true. Mr. Strong’s accusation here is dangerous and irresponsible. Like DREAMers, many of these children are victims of circumstance and a product of their environment – they had no choice in the decision to cross the border. It’s their guardians – parents or not – who are responsible for their environment during childhood and “personal decisions” are not even close to reality.

But the crux of this piece is this “traditionalist” argument that we’ve allegedly veered so far away from since the Vietnam War era and “especially” under President Barack Obama. These traditionalists value the family paradigm in the 1950’s, you know, when a woman’s place was in the kitchen cooking the food and raising the kids, while the father’s role was the breadwinner whose decisions were final. It was a sort of forced thoughtlessness, the exact opposite of a Democracy. And that’s not to say that children should have a say in every decision, but the sanctity of marriage should be a partnership and under the traditionalist ideology, it’s not. Furthermore, if a wife is okay with that specific role, then it’s also nobodies’ place to judge.

The most insulting part of Mr. Strong’s timeline – failing to even acknowledge – is that while those American values deteriorated in the 1960’s, the Civil Rights Movement also happened. I wanted to start this sentence with “To be fair, maybe Mr. Strong,” but that would be ridiculous. The rhetoric spewed in his piece discounts human equality and it’s nowhere more obvious in his description of the disintegration of society then when he discusses LGBTQ rights as the “new norm,” insinuating that these people – and black people apparently – should be second-class citizens in the United States.

Imperfect, As We (Some?) All Are

When it comes to Mr. Strong’s argument about Bill and Hillary Clinton’s sexual immorality, it’s hard to argue with that. Bill Clinton lied profusely about his sexual relations with White House aide Monica Lewinsky and Hillary didn’t seem to mind. But he also describes President Donald Trump as “imperfect, as we all are,” and I’m curious as to why Bill and Hillary Clinton are somehow excluded from this. Is it blinding bias? Is the hate towards the Clintons so overwhelming that rationale is incapable of penetrating anything close to his definition of traditionalism?

Also, this notion that “everything comes from the top” as if to say that adulterous behavior was suddenly accepted in society in the late 1990’s, which led to laws supporting LGBTQ rights is such a leap in logic – a desperate grasping at straws – that it’s hard to even fathom how Mr. Strong came to that conclusion.

To top it off, this notion that President Trump is a model moral figure fighting Christian apostasy is remarkably amazing.

The same guy who said in 2005 – locker room talk or not – “I did try and f*ck her. I moved on her very heavily. In fact, I took her out furniture shopping. She wanted to get some furniture. I said, ‘I’ll show you where they have some nice furniture.’ I moved on her like a b*tch, but I couldn’t get there. And she was married. Then all of a sudden I see her; she’s now got the big phony tits and everything. She’s totally changed her look.”

And then later talks about actress Arianne Zucker, who escorted Trump and Bush to the set of “Days of Our Lives.” “I’ve gotta use some Tic Tacs, just in case I start kissing her. You know I’m automatically attracted to beautiful ― I just start kissing them. It’s like a magnet. Just kiss. I don’t even wait. And when you’re a star they let you do it. You can do anything. Grab them by the pussy. You can do anything.”

So where is the false equivalency that I’m not seeing here? How are the Clintons far worse than Donald Trump?

The main takeaway is that these children – who are apparently all accountable for their actions – were never given a fair shake and it starts with the assumption that many were given this traditionalist family paradigm.

And most, certainly not, were ever given “a small loan of a million dollars.”

For another view, read the rebuttal: Federal Holidays Tell a Unique and Sobering Story About the History of the United States