Deprecated: Function create_function() is deprecated in /home/freepre8/public_html/wp-content/themes/Newspaper/includes/widgets/td_page_builder_widgets.php on line 7
 Decades of Familial Dominance is the Most Overlooked Aspect of the 2016 Election - Free Press Daily News
Friday, January 15, 2021

Home Moderate Center Right Decades of Familial Dominance is the Most Overlooked Aspect of the 2016... 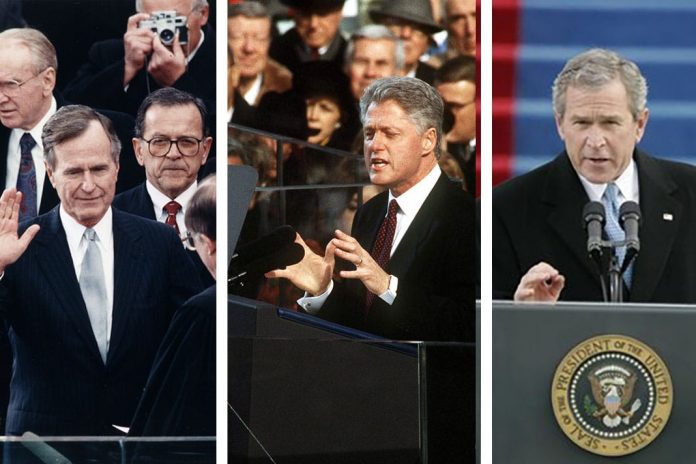 If you were to scour through the surnames of some of the most prominent politicians in U.S. history, you’ll find a repetitious pattern – Roosevelt, Kennedy, Buchannan, Bush and Clinton – all of them specifically evoke American politics.

Like a family that dominates any industry, part of the American dream is to pass the business on down for generations and that’s certainly no different in the political arena. In a lot of cases, especially in local politics, when a voter runs down the ballot, naturally, familiarity will likely win. And It’s an understandable proclivity because occupational surnames describe their ancestors trade skills.

Then you have obvious working-class occupational names like Butler, Carpenter, Cook, Fisher, Miller, Penny, Smith, Merchant, Houseman, and even phonetic misspellings like Schumacher and Hausman which all indicate the socioeconomic background their family history – sometimes even predating America. But political families’ names don’t usually have a blue-collar last name – other than Bush, go figure – and yet they still conjure a similar frame of reference.

However, over the course of the last 30 years things have changed. It started in 1988 with the election of George H.W. Bush., who served one term before losing to Bill Clinton. After 8 years and a disastrous ending to the Clinton administration, the American people narrowly made George W. Bush Jr. our commander-in-chief. Following another disastrous end to George W. Bush’s 8-year tenure with the 2008 economic housing crisis, Barack Obama became the first black president of the United States and a familial departure of the common race for the most powerful person in the world.

After another eight years, America’s frontrunners in early 2016 – before anyone thought Donald Trump was even a legitimate serious contender – the favorites were between Hillary Clinton and Jeb Bush. To recap the succession, starting in 1988, the familial dynasties presidential succession order were Bush, Clinton, Bush, Obama and then could’ve been Bush vs. Clinton in 2016.

By 2016, this mind-numbing name familiarity was commonplace and the question becomes whether voters were aware or if it or was this a notion that may have been festering in many American voters’ subconscious – because the very existence of political family dynasties’ existence enforces inequality and it delegitimizes American democracy. You can point to voters who voted for Donald Trump because of their unwavering hatred for Hillary Clinton. And this is precisely why voters are bitter about the Democratic process because they feel hopeless to change – the very antithesis of “by the people and for the people,” and certainly for “all men are created equal.”

But both Bernie Sanders and Donald Trump represented a departure from the norm and stretch the gamut of opposing ideologies. Sure, the Trump family name has been the epitome of American business moguls since Donald’s grandfather; Friedrich Trump migrated to America 1885 where he began the family dynasty. But Trump’s name was a departure for the better part of 30 years of two different families so the question becomes whether Hillary Clinton’s name influenced their vote.

And none of this has anything to do with the qualifications to be the president because as we all know that’s subjective – as proven by the 2016 election.

What made Donald Trump and Bernie Sanders so popular was that they both represented the extreme opposite ends of the political spectrum, but above all, at least they weren’t Hillary Clinton or Jeb Bush.