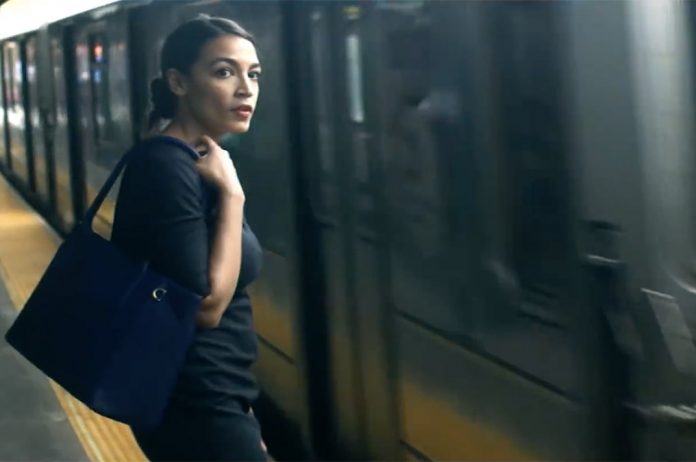 There is a disturbance in the political force. Alexandra Ocasio-Cortez took America by storm on June 26th when she upset Caucus Chair Congressman Joseph Crowley for the Democratic primary in New York’s 14th congressional district. She ran the very definition of a grassroots campaign, bringing her message to the literal doorstep of her community, all while refusing campaign donations from special interest groups.

The incumbent, Crowley, was being touted as the heir to Nancy Pelosi’s position as the House Minority Leader (or could’ve been the Majority Leader come November 2018). And the millennial that nobody knew two weeks ago, Ocasio-Cortez – who was barely born outside of the 1990’s – is only a whopping 28-years-old.

Is only a whopping 28-years-old

Make no mistake, Republicans are terrified, but you’d be mistaken if you didn’t think that the Democratic Party might even be more so. Ocasio-Cortez is a self-described democratic socialist – precisely how Bernie Sanders defines his politics. She ran on a platform of medical care being a right, tuition-free college or trade school, a guaranteed job for all and housing for every single person in America. It’s a platform of altruism and benevolence. But if you think these are strictly socialist policies, they’re not.

After @Ocasio2018 won the New York primary, the most searched term on the @MerriamWebster website was “democratic socialism.” @SRuhle explains how the term differs from the term “socialism.” pic.twitter.com/EFq0x0QA9a

These are the policies she’s running under.

This was @Ocasio2018‘s platform, taken from her office in Elmhurst, Queens —> pic.twitter.com/w9KqwRl00x

These kinds of policies scare the living hell out of fiscal conservative Republicans because it’s the federal government that takes more tax money directly out of their pockets.

At the start of my run for Congress, I publicly pledged to reject all corporate PAC money.

That’s because I didn’t want anything to get between my community and my advocacy.

We won with an average donation of $22.

So in response to her massive upset, the conservative media did their best to vilify the Bronx native as a radical. It’s an obvious desperate reach to calm their base because she has truly taken the country by storm. And like anybody who has a meteoric overnight rise to fame, they will be vetted and heavily scrutinized, digging up even the smallest semblance of controversy in their past – even if there’s nothing there.

John Cardillo is a conservative host of “America Talks Live” on Newsmax and here was his insensitive tweet about her background.

This is the Yorktown Heights (very nice area) home @Ocasio2018 grew up in before going off to Ivy League Brown University.

Here was Ocasio-Cortez’s witty diplomatic response to such an inanely myopic tweet.

2. It is nice. Growing up, it was a good town for working people. My mom scrubbed toilets so I could live here & I grew up seeing how the zip code one is born in determines much of their opportunity.

3. Your attempt to strip me of my family, my story, my home, and my identity is exemplary of how scared you are of the power of all four of those things.

Page Six reported a story that tried to bash Ocasio-Cortez by digging up an ex co-worker’s opinion of the budding star. Essentially the co-worker revealed that the Democratic nominee was cheap in tipping her out after a holiday.

And Sean Hannity laughably tried to criticize the Democratic nominee by listing all of her policies as if these altruistic policies for all people were malicious and “downright scary.”

At the start of my run for Congress, I publicly pledged to reject all corporate PAC money.

That’s because I didn’t want anything to get between my community and my advocacy.

We won with an average donation of $22.

They call it dangerous and she calls it human decency.

Surprisingly, Bill O’Reilly and Glen Beck defended the Ocasio-Cortez against the conservative media.

I have heard some Republicans deride Alexandria Ocasio-Cortez and I think that’s a mistake. She won by outworking long time Democratic Congressman Joseph Crowley and seems to care more about people than power. A good thing for any politician.

I totally agree with @BillOReilly. @Ocasio2018 seems genuine and honestly trying to do what she believes is right. I completely disagree with her solutions, but she is listening to her community. I would rather debate an open socialist than those who hide what they believe. https://t.co/kOVVGBvqJK

And Ocasio-Cortez responded to Beck.

Thank you, @glennbeck. We may disagree, but I sincerely appreciate the good faith.

In the course of my campaign, I’ve shaken hands & knocked doors of GOP voters. I genuinely listen + engage and earn their respect, too.

It’s a value of mine to meet people where they’re at. https://t.co/GDdXX6t2et

But Democrats are also scared.

Democratic Sen. Tammy Duckworth warned against the Party’s shifting on CNN’s “State of the Union” saying they’re becoming “too far to the left.”

Ocasio-Cortez shut down her logic.

With respect to the Senator, strong, clear advocacy for working class Americans isn’t just for the Bronx.

We then lost several of those states in the general. What’s the plan to prevent a repeat? https://t.co/99K08qr7SH

And she’s a hard worker if these shoes are any indication.

Some folks are saying I won for “demographic” reasons.

1st of all, that’s false. We won w/voters of all kinds.

2nd, here’s my 1st pair of campaign shoes. I knocked doors until rainwater came through my soles.

Respect the hustle. We won bc we out-worked the competition. Period. pic.twitter.com/RbpQMYTiWY

She hasn’t won the House seat yet but polls had her down as many as 36 points going into the primaries and she beat Crowley by 15 points, which is a staggering 51-point swing.

Alexandria Ocasio-Cortez is the future of America and it’s time for Democrats to embrace her because she’s coming for Republicans.