Home Liberal Fox News’ Kanye West Hypocrisy is Why Nobody Should Take them Seriously... 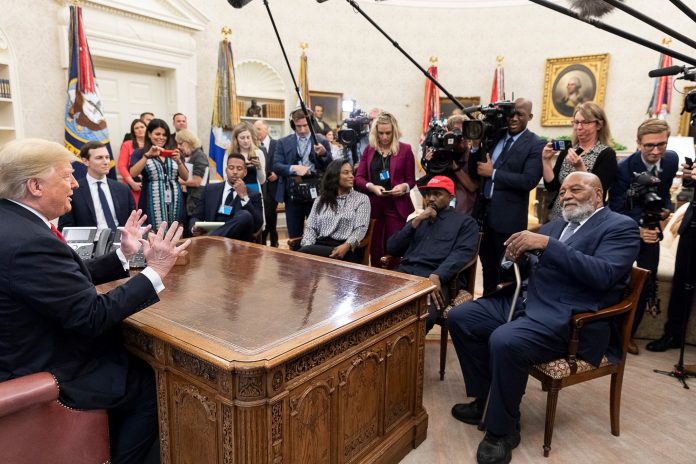 Kanye West visited the President Trump White House last week where he sat across from the Commander-in-Chief and made some wild accusations. One was that he believed Trump made him feel like “Superman” with his Make America Great Again hat.

It was a bit of a circus.

The media was there in full force to capture the moment and running back Browns’ Hall of Famer Jim Brown was also in attendance. It felt like a Trump administration gimmick to make viewers think that the president has a lot of black friends; in the way someone says “I’m not racist; my best friend is black.”

It was tiresome even before it began.

But Fox News loves Kanye West. It’s quite simple as to why; he simply loves their boy, President Donald Trump.

Just recently, Taylor Swift, who has never taken a political position in her entire career, supported a Tennessee Democrat.

Fox News had on alt-right conservative star, Charlie Kirk, to say that she was a lovely person and everybody loved her music until this political stance. West did the exact same thing but from the conservative side.

And the conservative news station that’s actually banned in the United Kingdom because of their overly aggressive views, backed Kanye in the most peculiar way.

Watch this video and discover it for yourself.

As recently as 2017, Fox News anchors thought having rappers in the WH was an abomination.

The only difference?
The political party (and color) of the president.#SaturdayMorning #AMJoypic.twitter.com/37gDooUOMD

These Fox News analysts kept using the “N-word” as a reason to discredit musicians because it was offensive. At the time. Kanye West is notorious for his use of that word.

It’s important to note that if artists want to use that word, who hail from an African American descent background, then that’s okay to use. Just make sure it’s mature content.

It’s inappropriate for any other race to use that word. That should be crystal clear and white America should abide by what ever black America wants on this particular subject because they’ve been victimized for hundreds of years.

It’s inappropriate for any other race to use that word

But that’s not what Fox News wants.

That excerpt perfectly defines what’s at the heart of the Fox News agenda.

They don’t care about the use of the “N-word,” they only care about the pro-President Trump agenda. That’s exactly what Kanye West represents and the fact that he’s also a celebrated Grammy Award winning rapper is just the icing on the cake.

Fox News loves to find black Americans defend Trump’s racist Mexico, African, Middle Eastern policies because they want a white America. It’s like sending a signal to anybody outside of the pro-conservative realm that you’re unwelcome. That’s white supremacy tactics.

It also harkens back to this Fox News gem of a take right here.

For anyone saying that Democrats are hypocrites because they aren’t thrilled that an American President is legitimizing a despotic tyrant who murders his family members in order to stay in power, please watch this and then kindly f off.#TrumpKimSummitpic.twitter.com/cvuyNUHzDM

If this isn’t a dead give away; they want to make it seem like the mainstream media is all liberal, but they’re the biggest news channel in this country.

They are actually the mainstream media. They don’t care how it looks in the long run but it’s important that these discrepancies are pointed out.